Just over a week ago I broke my ankle. I’d like to say I broke my ankle skiing, jumping out of a plane but alas, I did not. I broke my fibula by tripping over on the way to my host families home from my car.- yeah, really not a super interesting story. What was more annoying than breaking my ankle (which I can tell you, is very annoying) was that I had just got back into the swing of running again after almost a year and as much as I’d like to try to run with one leg, I can barely hobble on my crutches so maybe that’s not a great idea. I have decided to keep a journal of my recovery from sitting here on my sofa to running ten kilometres.

I was working in Italy when I broke my ankle and luckily, my mum and my brother were already going to Italy for a bit of a holiday when I broke my ankle so they were able to help me come back home. First however, I needed to make it to Milan which was a good three and a half hour train journey away with a change in Torino. Once I had made it to Milan with the help of wheelchair assistance, I spent the next day (day 4 AB- after break) in bed, leg elevated and House MD on Netflix.

Day 5 AB  and I was going a little stir crazy so with the help of a borrowed wheelchair from the hotel, we went to the Museum of Science and Technology of Leonardo Da Vinci. I thoroughly enjoyed going around learning about Mr Da Vinci’s ideas, plans and inventions and was amazed at how much he contributed to modern life. I was a bit disappointed the museum wasn’t as interactive as I would have hoped for but I had fun. Unfortunately this was going to be the only bit of Milan I was going to see on my trip there because the next day, I decided to rest my leg in order to prepare for the plane back to Gatwick the following day. I’m just going to have to go back to Milan at some point, how very disappointed I am teheh. 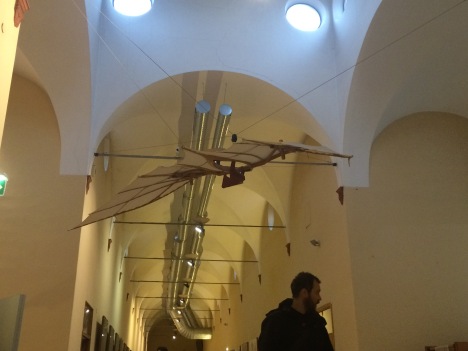 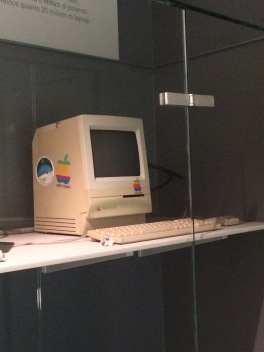 To get those in a wheelchair on those flights where you have to climb up the stairs to get into the aircraft, airports use this huge, terrifying crane like machine which brings you to one of the planes exits. Cabin crew then take off the door and you wheel in. This was one of the most terrifying experiences of my life, while waiting for everyone to board, I felt like I was in a waiting room before St Peters pearly gates. I was waiting to know if I’d been good enough to be let in the slightly cramped machine that somehow defies gravity and moves in the sky.

Everyone told me my leg was going to swell up on the plane, and I listened but I didn’t quite understand how much my leg was going to swell up. My nicely deflated ankle that was comfortable in the temporary cast within minutes after taking off swelled to the size of a 200 year old oak tree and suddenly very very uncomfortable. So anyone flying, with or without a broken ankle, wear flight socks! I’ll never be flying without them again.

The journey back to London and since has been rather uneventful except when a police officer stepped on my broken foot in A&E but luckily he stepped on the side of the foot that wasn’t broken and it was just a bit sore and was very apologetic. It’s only been a week but I can see Netflix and YouTube becoming mind numbing and my eyes complaining I’m reading too much. For this reason, I can assume at times I will feel a bit down and while I am perfectly able to go out, right now, it’s going to be a bit difficult while I get used to the crutches. Hopefully, in those moments, if I go back through and look at the progress I have made, I’ll be cheered up a bit.

Have any of you broken your ankle or another bone? Let me know in the comments below and how you got used to those crutches!

My Tweets
Follow Tea, Tales and Travel on WordPress.com